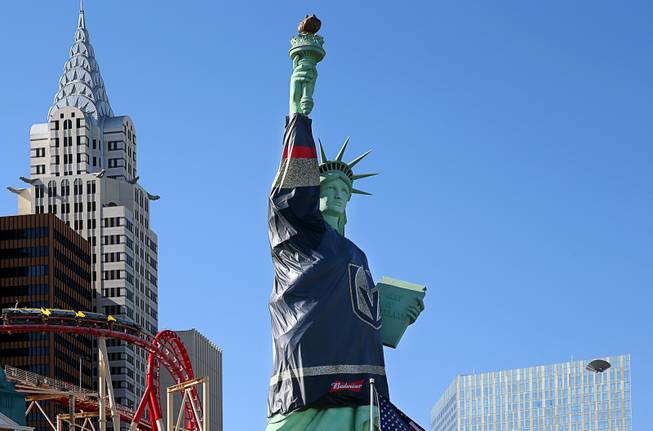 A hockey fan wearing gear from the opposing team waits in line at the Golden Knights team store at T-Mobile Arena on the Strip. He is waiting to buy Vegas apparel — a scenario that played out repeatedly during the franchise’s maiden season.

“One of my favorite things is seeing a fan in a Red Wings jersey standing in line to buy a Golden Knights jersey,” said Kerry Bubolz, the Golden Knights’ president. “That happened at just about every single game.”

The team’s massive first-year success, everything from standing-room-only crowds for practice to finishing with the best record for an expansion team in any major sport, shows Las Vegas and professional sports are a good match.

That was one of the messages Friday at Nevada State College in Henderson during a panel discussion of the area’s sports executives organized by the Latin Chamber of Commerce.

Before major professional sports arrived with the Golden Knights, one concern was potential distractions for a team in a 24-hour town. When Vegas started winning games early in the season, some credited it to the “Vegas flu,” or the visiting team getting caught up enjoying the Las Vegas nightlife.

“We enjoy the narrative around it with the national media and I think there were other visiting teams that actually thought it was the reason why they didn’t play so well when the played us,” Bubolz said. “If that was their mindset and the reason why they didn’t play well, that’s OK with us. We liked it, because it meant that they weren’t necessarily staying as focused on what they should have been focused on when they were getting ready to play us.”

One of the reasons for the success is the massive home ice advantage, which many believe is the best in the NHL.

Knights officials were determined when the franchise launched two years ago to be visible in the community because they realized that was crucial in growing a fan base. The town’s other teams have a similar strategy.

When the WNBA Aces announced its relocation plans in November, the team wasted no time in trying to connect with its potential fan base. It hosted fan events at Mandalay Bay Events Center — its home arena — and has made numerous appearances around town. It’s also aggressive in working with the youth girls basketball community.

“It’s been really important for us to get into the community to let them know that we’re here and let them know what we represent,” Brown said. “It’s not just about putting a great product on the court, it’s about making a difference in the community. Giving these young girls and student-athletes role models and giving them a perspective of what it could potentially be for them.”

Part of the marketing includes the local teams working together. For instance, the Lights’ Joel Huiqui wore a Vegas Golden Knights jersey when he was introduced in a game last month, and Aces players attended a Golden Knights playoff game last week.

More important, fans at one game often have on gear from another of the city’s teams. It’s helped grow a passion for the city with residents.

“What’s happened on the ice has been special, and it has allowed us to really understand what a major pro sports team brings to a market and how it’s a common thread to rally a marketplace,” Bubolz said. “The wins and losses are a lot of fun and I enjoy that part, but I love how it’s bringing this community together in a different way. That, to me, is the real power of pro sports.”

When the NFL arrives in town in 2020 with the Raiders, it will fit in with the city’s growing sports landscape, the group said. With the area continuing to expand with residents, sports executives aren’t worried about the valley being able to support each team.

“You have 2.3 million people and 43 million visitors — that’s enough to support plenty of teams,” Badain said. “We’ve seen the way the Knights have galvanized the community and we’ve always had a strong fan base here, and when you look at the statistics you see fans of pretty much every team in this market and we were always in the top few.”

When you consider the area will soon have two new venues — the $1.8 billion stadium for the Raiders and UNLV football, and the 51s new stadium in downtown Summerlin — the general consensus with the group is the memorable nights in Las Vegas sports are just beginning.

“It’s been awesome welcoming everybody. To have major league sports here is long overdue for Las Vegas, and we don’t look at it as competition in the slightest,” said Johnson of the 51s, who were the first team here in the early 1980s. “We play in the part of the season that now will have some soccer games around us, we’ll have the Aces play around us, but NHL and the NFL have a season that’s away from us.”