The Least Vegas Neighborhood in Vegas 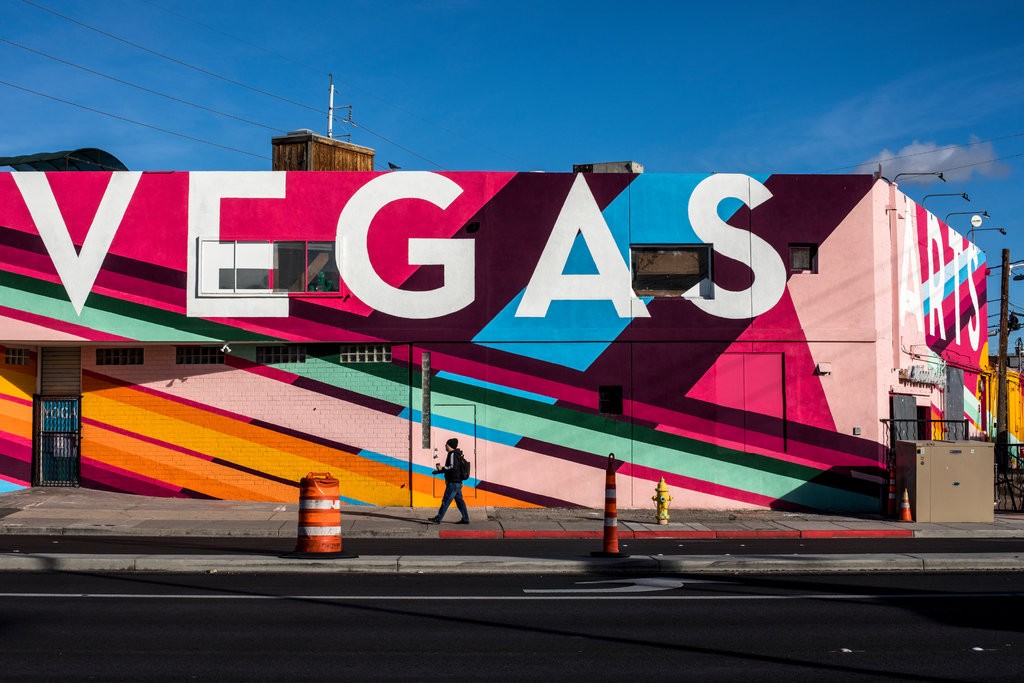 The city’s Arts District offers theater without blue men or topless women, no poker tables, and the kind of indie food and bar scene not often seen on the Strip.

Azia Skeen discovered Las Vegas’s little-known (to tourists, anyway) Arts District by chance. Her plane home to San Diego was delayed, and at 19, she was too young to gamble in the casinos.

With 12 hours to kill, she wandered into the Arts District, an 18-square-block area of low-slung commercial properties and current and former auto-repair shops that’s hidden between the towering Stratosphere and the faded glory of Fremont Street. On Ms. Skeen’s first visit, the neighborhood was in the throes of First Friday, a monthly event that attracts thousands of visitors to venues such as the Arts Factory, home to the studios and small galleries of some two dozen local artists.

“We were accepted immediately, and I hadn’t experienced that,” Ms. Skeen, now 22, said.
She soon moved to Las Vegas, where she lives within walking district of the Arts District on East Fremont Street, and works as a visual artist and curator for small-business owners like Derek Stonebarger, the Arts District Neighborhood Association’s president and the proprietor of ReBar, a drinks joint, which serves local butcher John Mull’s hot links on pretzel buns and doubles as a vintage-goods store.

Also known as 18b (for its 18 blocks), in the late ’90s the Arts District boasted just a handful of retail businesses, among them the Arts Factory and Casa Don Juan, a Mexican restaurant that serves hulking wet burritos and delivers free shots of liquor to its patrons whenever the Golden Knights, the local National Hockey League team, score a goal.

At about the same time, a once-thriving nocturnal coffeehouse scene on Maryland Parkway near the University of Nevada Las Vegas died out. P.J. Perez, a filmmaker who is working on a feature-length documentary, “Parkway of Broken Dreams,” said that “the same 100 artists, poets and musicians who are movers and shakers at any given time” in Vegas began to migrate downtown to venues like the Arts Factory.

Dynamic, independent-minded neighborhoods are few and far between in Las Vegas. This gave Pamela Dylag pause when she considered locating a cocktail bar in the Arts District after living in Portland, Ore., and Tokyo.

“Nothing really existed in terms of what we wanted to offer,” says Ms. Dylag, a Las Vegas native. “It was all strip malls; there weren’t any craft cocktail bars.”

In 2013, Ms. Dylag and her sister, Christina Dylag, opened Velveteen Rabbit, a cozy, hip spot on Main Street. Even then, the Arts District had yet to really take off; that would happen around the time Mr. Stonebarger opened ReBar in 2016, and accelerated this past fall when the city completed a multimillion-dollar road paving and beautification project in the neighborhood. But Pamela Dylag was “pleasantly surprised how busy it was right out of the gate.”

“We were kind of an island,” she adds. “People really sought us out.”

One of those people was Clayton Waldhalm. He moved to Las Vegas from North Dakota when he was 16 because his father, a sheet-metal worker, had far better prospects in a city where, Mr. Waldhalm said, “they tear down perfectly good buildings.” A ReBar regular, he lives near the Stratosphere and works for Clark County. It takes him seven minutes to walk from work to ReBar after quitting time, so when Mr. Waldhalm advertises the fact that he’ll be there at 6:37 p.m. on his popular Facebook page, you can rest assured that’s precisely when he’ll stroll through the door.

“In other parts of Vegas, they give you service and stuff, but they don’t know who you are,” he said. “You go into Artifice or ReBar and it’s like, ‘Clay, how you doing?’

”Artifice is a dark, spacious bar in a complex called Art Square, where its neighbors include the Cockroach Theatre, a spartan space that hosts productions like “Incognito,” a fine four-hander by the playwright Nick Payne that ran late last year. Seeing live theater that doesn’t involve blue men or topless women might seem surreal to some in Las Vegas, but it’s not uncommon in the Arts District, where the Majestic Repertory Theater offers similarly edgy productions and Velveteen Rabbit hosts regular theatrical performances, including Bard at the Bar, which gives patrons a dose of live Shakespeare alongside their Campari Sours.

These sorts of unexpected experiences are what has Las Vegas’s most un-Vegas-like neighborhood — there’s not a poker table to be found, unless you count those that you can buy for your own basement at Spinetti’s Gaming Supplies — thriving in the wake of 2017’s tragic Route 91 Harvest Festival massacre, which Mr. Stonebarger says “united all of Las Vegas to build a community.”

An old motel, the Thunderbird, recently reopened as a sleek boutique lodging option on South Las Vegas Boulevard, within walking distance of two soulful dive bars (Dino’s Lounge and The Huntridge Tavern), a pair of coffee shops (Vesta and Makers & Finders), a microbrewery (Hop Nuts) and a pasta restaurant (Esther’s Kitchen), where delicious dishes just seem to appear at your table, as if the sous chef had wiretapped your tongue.

But at the heart of the Arts District is art, and in the heart of the Arts Factory a week after Thanksgiving was Alex Huerta, burning incense as he showed off some tastefully primitive work in a tiny studio he’s inhabited since 2008. Part of the collective 3 BAAAD Sheep, Mr. Huerta first got turned on to art when he saw a Picasso that casino magnate Steve Wynn owned, and has been painting ever since.

“The thing about downtown Las Vegas art is there are a lot of visitors who need a decompress from all that neon junk,” he explains. “They didn’t know there was art in Las Vegas, so I give them the best experience I can give them.”